Last week, it was announced that the Web Summit would be leaving Dublin and this caused a certain amount of handwringing about the impact this would have on Ireland. There were muttered comments about hotels and room rates as well.

I found it very difficult to get excited and upset about this. The bigger news in Dublin last week was the “delaying” of the interconnector, a massive, massive piece of infrastructure which the city is screaming out for and has been screaming out for since I do not know when. Dublin public transport is painful.

The other issue is that I’ve never really seen the Web Summit as anything to get excited about. I have never seen it as a technology conference and most of the people I know who went to it worked in marketing or were students. I’ve always felt a lot of claims have been made for it but when push came to shove, they really only seemed to mention one big deal that was done there. And it was the sort of deal which doesn’t happen without a lot of advance preparation. In short, it was the sort of deal which I suspect would have happened anyway.

So where does that leave us? Well, I still don’t care about the fact that the Web Summit is relocating to Lisbon. My personal experience of rush hour traffic getting from Lisbon to the airport in Lisbon would not necessarily lead me to believe things are massively better there. But there are linked issues. We don’t really have the infrastructure for a large indoor conference like that (although let’s face it, we do a decent enough job on music festivals and ploughing championships). The question is, would it be worth our while building somewhere to handle conferences and fairs with an attendance of tens of thousand? I have some doubts. If we learned anything much in the last 10 years – and I doubt it was much – it was that Build It And They Will Come is not a recipe for success. I cannot see the point in doing something like that unless we could identify a minimum number of annual events to make it worth our while to build it. I’m not in event management so maybe someone could come up with it. However, I do have certain interests and can say that frankly I have had cause to look at some of the events which go to the Hannover Messehalle and Frankfurte Messe. We’ve a long way to go.

That being said, the big issue I have with the Web Summit is that it’s not a technology conference much and it certainly isn’t tech sector in my view. It’s event management and that’s it. I don’t think it’s a loss to our tech sector and for all that’s said about it, evidence that it has a major impact on our tech sector seems to be scant. Given the ability to shout about it, I find this curious.

If we are to be concerned about the Web Summit at all, it is purely in the context of whether we want to be able to attract large conferences/fairs/shows to Dublin and whether, given our relative isolation, we would be able to. We can be expensive enough to reach if you’re not on a point to point connection. So no decision on whether the loss of Web Summit is good or bad should be made in the context of ochon o my chroi, we’ve lost the Web Summit, but in the hard cold calculations of whether we can, at least 4 times a year, get large numbers of people to come to Dublin for a conference of any description. When I look at the conferences I’m more familiar with such as CeBit in Hanover and the London Stationery Show (I have diverse interests), I recognise that we are nowhere close to even being able to start with these things. And for all the big shows which take place like the various car shows, yes these places have airports. Most of them also have rail connectivity to other urban areas. Put simply, I doubt you could argue in favour of a large conference venue in Dublin absent a high speed train connection to more places than Cork and Belfast. We are not Frankfurt, we are not Hanover. We are not London. Our hinterland is too small for things like this in my view. For all that Portugal has a bigger population, I’m not convinced that they are any better either.

I’m of the opinion that if Web Summit genuinely had a vision of a future where they were huge and could bring that level of audience to Ireland consistently, they would be able to build their own premises as a conference centre. If the demand for large conferences in Ireland was there, it would make them a profit. If it isn’t, it wouldn’t. They’ve very obviously voted with their feet.

During the week, Wired published a piece under the title Github’s Top Coding Languages Show Open Source Has Won.

This is basically – and I am being diplomatic here – not what Github’s Top Coding Languages shows.

Fundamentally, for Github to show this, every piece of operational code would have to be on Github. It isn’t. I’d be willing to bet less than half of it is, and probably less than a quarter, but that’s a finger in the air guess. Most companies don’t have their code on Github.

What Github’s top ten coding language shows is that these are the ten most popular languages posted by people who use Github. Nothing more and nothing less.

I suspect Github know this. I really wonder why Wired does not.

Having done Dublin Bus, it occurred to me to see if the Bus Eireann network was available. It is. 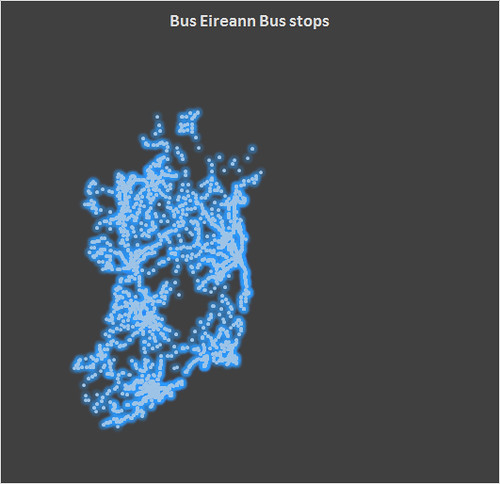 This is actually a bit more interesting than the Dublin Bus one for various reasons, specifically the gaps. I’m fascinated by the big hole in the middle and I will probably look at doing some additional work in terms of other spatial data.

I’ve just been asked where I get the data and it’s remiss of me not to credit the data source. The data for both Bus Eireann and Dublin Bus, plus a number of other operators is available on Transport for Ireland’s website. The link is here.

I haven’t cleaned up this graph all that much and I have additional plans for this and the other transport data that I have been looking at. 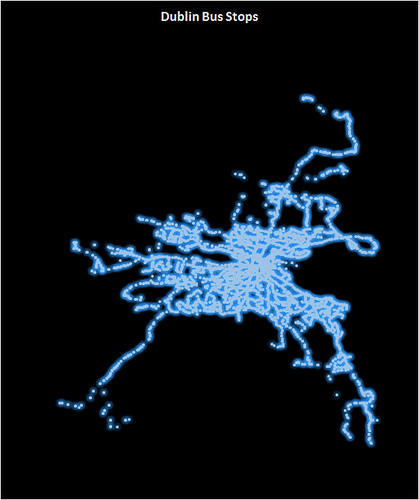 This is one of the items on the project list. This image is a scatter plot of Dublin Bus latitude/longitude values for Dublin bus stops. The file this is based on, which I pulled into Excel to do this (yes, I have other plans involving R at some point which may see this revisited) has more than 4700 datapoints. Looking at it like this, I’m going to see if I can find a similar dataset for street lights. I think it’s a rather beautiful looking spiders’ web.

I scribbled a quick overview of why I am interested in pre-war navigation aids here. It’s part of my ongoing research interests so stuff may or may not turn up as I get more information feeding that.

In other news, I have a bunch of other things which interest me so they will probably generate some stuff under the research interests link.

Seriously, I have a scary to do list but I finally got around to having a go with this the other day. It is very very nice. If you’re leaning towards a RaspPi and are interested in symbolic programming, it’s a pretty good place. Worth remembering that a RaspPi is not scary fast (ie, Mathematica on it is not hugely fast) but it comes across as something that a) is nice to work with and b) I will probably license on a bigger machine at some point.